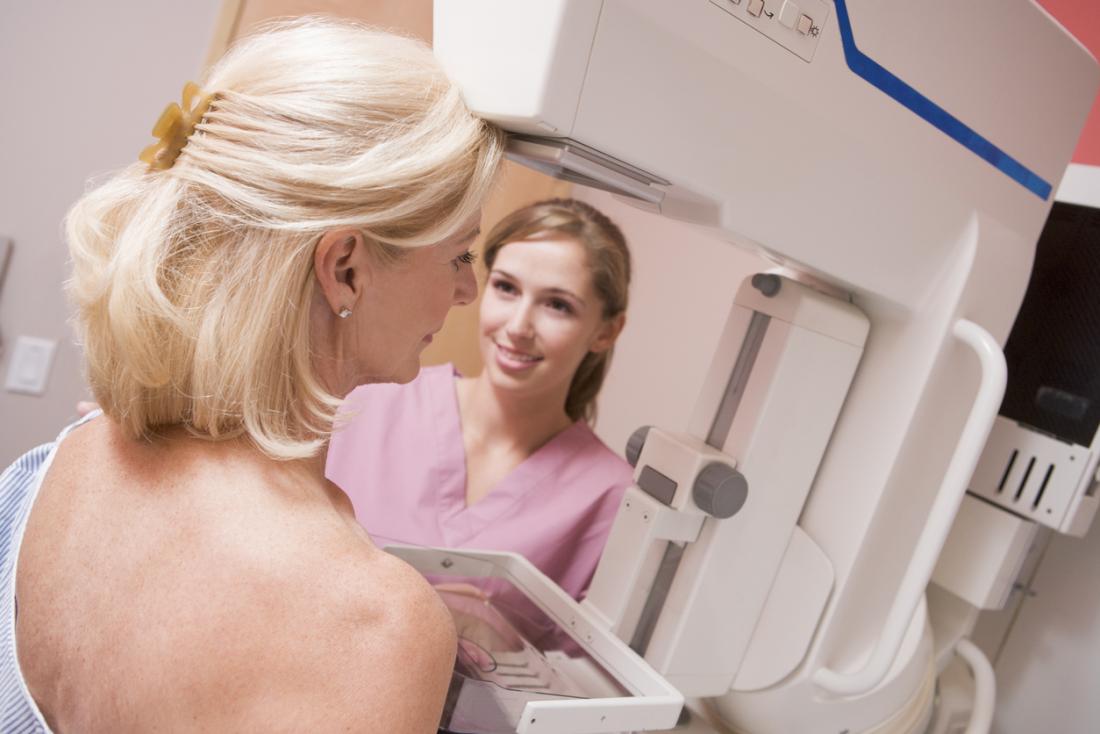 Breast cancer is the most common invasive cancer in women and the second leading cause of cancer death in women after lung cancer.

Advances in screening and treatment for breast cancer have improved survival rates dramatically since 1989. According to the American Cancer Society (ACS), there are more than 3.1 million breast cancer survivors in the United States. The chance of any woman dying from breast cancer is around 1 in 38 (2.6%).

In the same year, the ACS report that 41,760 women will die as a result of breast cancer. However, due to advances in treatment, death rates from breast cancer have been decreasing since 1989.

Most breast lumps are not cancerous. However, women should visit a doctor for an examination if they notice a lump on the breast.

A doctor stages cancer according to the size of the tumor and whether it has spread to lymph nodes or other parts of the body.

There are different ways of staging breast cancer. One way is from stage 0–4, with subdivided categories at each numbered stage. Descriptions of the four main stages are listed below, though the specific substage of a cancer may also depend on other specific characteristics of the tumor, such as HER2 receptor status.

After puberty, a woman’s breast consists of fat, connective tissue, and thousands of lobules. These are tiny glands that produce milk for breastfeeding. Tiny tubes, or ducts, carry the milk toward the nipple.

Cancer causes the cells to multiply uncontrollably. They do not die at the usual point in their life cycle. This excessive cell growth causes cancer because the tumor uses nutrients and energy and deprives the cells around it.

Breast cancer usually starts in the inner lining of milk ducts or the lobules that supply them with milk. From there, it can spread to other parts of the body.

The exact cause of breast cancer remains unclear, but some risk factors make it more likely. It is possible to prevent some of these risk factors.

Women who carry certain mutations in the BRCA1 and BRCA2 genes have a higher chance of developing breast cancer, ovarian cancer, or both. People inherit these genes from their parents.

Mutations in the TP53 gene also have links to increased breast cancer risk.

3. A history of breast cancer or breast lumps

Women who have previously had breast cancer are more likely to have it again than those who have no history of the disease.

Having some types of noncancerous breast lump increases the chance of developing cancer later on. Examples include atypical ductal hyperplasia or lobular carcinoma in situ.

Individuals with a history of breast, ovarian, fallopian tube, or peritoneal cancer should ask their doctorsTrusted Source about genetic testing.

Women with more dense breasts are more likely to receive a diagnosis of breast cancer.

Extended exposure to estrogen appears to increase the risk of breast cancer.

This could be due to a person starting their periods earlier or entering menopause at a later than average age. Between these times, estrogen levels are higher.

Breastfeeding, especially for over 1 year, appears to reduce the chance of developing breast cancer. This is possibly due to the drop in estrogen exposure that follows pregnancy and breastfeeding.

Women who become overweight or develop obesity after menopause may also have a higher chance of developing breast cancer, possibly due to increased estrogen levels. High sugar intake may also be a factor.

A higher rate of regular alcohol consumption appears to play a role in breast cancer development.

Undergoing radiation treatment for a different cancer may increase the risk of developing breast cancer later in life.

According to the NCI, studies have shown that oral contraceptives may slightly increase the risk of breast cancer

According to the ACS, studies have found that hormone replacement therapy (HRT), specifically estrogen-progesterone therapy (EPT), is related to an increased risk of breast cancer.

A 2013 reviewTrusted Source found that women with cosmetic breast implants who received a diagnosis of breast cancer also had a higher risk of dying from the disease.

This could be due to the implants masking cancer during screening or because the implants bring about changes in breast tissue.

However, a 2015 reviewTrusted Source published in Aesthetic Surgery Journal found that having cosmetic breast implant surgery did not increase the risk of breast cancer.

Scientists need to carry out more research to confirm the link.

There are several different types of breast cancer, including:

Invasive breast cancer occurs when the cancer cells break out from inside the lobules or ducts and invade nearby tissue. This increases the chance of cancer spreading to other parts of the body.

A doctor often diagnoses breast cancer as the result of routine screening or when a woman approaches her doctor after detecting symptoms.

Several diagnostic tests and procedures help to confirm a diagnosis.

The doctor will check the breasts for lumps and other symptoms.

During the examination, the person may need to sit or stand with their arms in different positions, such as above their head or by their sides.

Mammogram: This is a type of X-ray that doctors commonly use during an initial breast cancer screening. It produces images that can help a doctor detect any lumps or abnormalities.

A doctor will usually follow any suspicious results with further testing. However, mammography sometimes shows a suspicious area that turns out not to be cancer.

Ultrasound: This scan uses sound waves to help a doctor differentiate between a solid mass and a fluid-filled cyst.

MRI: Magnetic Resonance Imaging (MRI) combines different images of the breast to help a doctor identify cancer or other abnormalities. A doctor may recommend an MRI as a follow-up to a mammogram or ultrasound. Doctors sometimes use them as a screening tool for those at higher risk of breast cancer.

Here, learn more about how to prepare for a mammogram.

In a biopsy, the doctor extracts a sample of tissue and sends it for laboratory analysis.

This shows whether the cells are cancerous. If they are, a biopsy indicates which type of cancer has developed, including whether or not the cancer is hormone sensitive.

Staging provides a picture of a person’s chances of recovery and their ideal course of treatment.

Treatment will depend on several factors, including:

The main treatment options include:

Factors affecting the type of treatment a person has will include the stage of the cancer, other medical conditions, and their individual preference.

If surgery is necessary, the type will depend on both the diagnosis and individual preference. Types of surgery include:

Lumpectomy: This involves removing the tumor and a small amount of healthy tissue around it.

A lumpectomy can help prevent the spread of the cancer. This may be an option if the tumor is small and easy to separate from its surrounding tissue.

Mastectomy: A simple mastectomy involves removing the lobules, ducts, fatty tissue, nipple, areola, and some skin. In some types, a surgeon will also remove the lymph nodes and muscle in the chest wall.

Here, learn about the different types of mastectomy.

Sentinel node biopsy: If breast cancer reaches the sentinel lymph nodes, which are the first nodes to which a cancer can spread, it can spread into other parts of the body through the lymphatic system. If the doctor does not find cancer in the sentinel nodes, then it is usually not necessary to remove the remaining nodes.

Axillary lymph node dissection: If a doctor finds cancer cells in the sentinel nodes, they may recommend removing several lymph nodes in the armpit. This can prevent the cancer from spreading.

Reconstruction: Following mastectomy, a surgeon can reconstruct the breast to look more natural. This can help a person cope with the psychological effects of breast removal.

The surgeon can reconstruct the breast at the same time as performing a mastectomy or at a later date. They may use a breast implant or tissue from another part of the body.

A person may undergo radiation therapy around a month after surgery. Radiation involves targeting the tumor with controlled doses of radiation that kill any remaining cancer cells.

Learn more about the benefits and adverse effects of radiation therapy.

A doctor may prescribe cytotoxic chemotherapy drugs to kill cancer cells if there is a high risk of recurrence or spread. When a person has chemotherapy after surgery, doctors call it adjuvant chemotherapy.

Sometimes, a doctor may choose to administer chemotherapy before surgery to shrink the tumor and make its removal easier. Doctors call this neoadjuvant chemotherapy.

They usually administer hormone blocking therapy after surgery but might sometimes use it beforehand to shrink the tumor.

Hormone blocking therapy may be the only option for people who are not suitable candidates for surgery, chemotherapy, or radiotherapy.

Doctors may recommend a person has hormone therapy for 5–10 years after surgery. However, the treatment will not affect cancers that are not sensitive to hormones.

Examples of hormone blocking therapy medications may include:

Treatments for breast and other cancers can have severe adverse effects. When deciding on a treatment, people should discuss the potential risks with a doctor and look at ways to minimize the side effects.

A person’s outlook with breast cancer depends on the staging. Early detection and treatment usually lead to a positive outlook.

According to the ACS, a person who receives treatment for stage 0 or stage 1 breast cancer has a 99% chance of surviving for at least 5 years after being diagnosed, when compared to women who do not have cancer.

If breast cancer reaches stage 4, the chance of surviving another 5 years reduces to around 27%.

Regular checks and screening can help detect symptoms early. Women should discuss their options with a doctor.

There are several different guidelines for how often women should have breast cancer screening.

The American College of Physicians (ACP) recommendTrusted Source that women aged 40–49 years with an average risk of breast cancer should discuss the benefits and risks of regular screenings with a doctor.

Between 50 and 74 years of age, women who have an average risk should undertake screenings every 2 years. Beyond 75 years of age, doctors only recommend screenings for women with a life expectancy of 10 or more years.

The ACS suggest that women of average risk can choose to have yearly scans from the age of 40 years onward. Those who have not should start annual screening at 45 years of age. They may decide to switch to screenings every other year when they reach 55 years of age.

The American College of Radiologists recommend screenings every year, starting from 40 years of age.

Despite the different recommendations, most experts agree that women should talk to their doctors about breast cancer screening from 40 years of age onward.

There is no way to prevent breast cancer. However, certain lifestyle decisions can significantly reduce the risk of breast cancer as well as other types.

Women should consider their options for breastfeeding and the use of HRT following menopause, as these can also increase the risk.

Preventive surgery is also an option for women at high risk of breast cancer.

The Breast Cancer Healthline app provides people with access to an online breast cancer community, where users can connect with others and gain advice and support through group discussions.

Latest news
Event’s calendar
Follow us
Back To Top